The company buildings were clearly enlarged

With kind approval of the sector magazine about leather: www.pro-leder.de 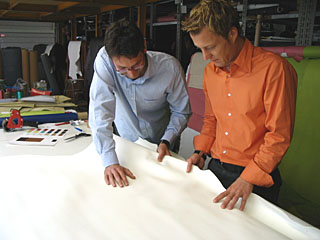 Jacobs GmbH in Rödermark is expanding

Since last summer the company buildings of Jacobs GmbH in Rödermark have been enlarged by 50% as for the surface of offices and by 80% as for the warehouse.

This was possible thanks to the acquisition of a nearby let building.

When the company was set up 40 years ago by Eberhard Jacobs, it was just a commercial representative company. Later trade was introduced and today the range of action of the company, that meanwhile has passed under Bernd and Michael guidance, stretches from the own development of the production to sales. Raw materials are bought and then finished in European factories, mainly in Italy. In this country a standing collaborator on the spot ensures the constant monitoring of the production.

Michael Jacobs entered the business in 1990 and today is sales manager.

His brother Bernd joined the team three years later and today is in charge of the inner management of the company. 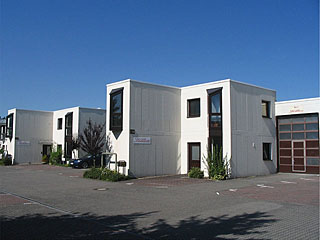 The enlarged company premises in Rödermark

After their father’s retirement, the two brothers became executive directors of the company.

The company of Rödermarker, that has 11 employees at the moment, decided to address a medium-high market up to the luxury one.
The main customers are first of all leather goods manufacturers: about 50% of the leather sold by Jacobs is used in bags, belts and small clothing items manufacture. 30% of the turnover comes from the shoes manufacture and 20 % from the bookbinding leather.

From a regional point of view Germany, Austria, Swiss and the Netherlands are the main market s even though in the meanwhile it has gained regular customers also in Italy.

“As always our objective is to address a medium-high European market” says Michael Jacobs. According to him, keeping pace with fashion is one crucial factor for Jacobs’ collection. 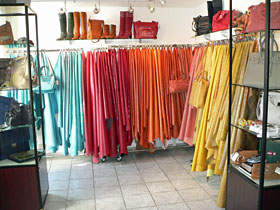 In the show room customers can have an overview
of the recent wide offer.

Another feature that distinguishes Jacobs at its customers’ eyes is the comprehensive range of products that the company offers. “When a customers calls us, he knows that he won’t need to run from pillar to post to collect all the items he needs” adds Jacobs by making reference to the types of product included in the offer. It contains leather but also synthetic materials, fabrics and metal accessories.

So far the project has been successful: evidence for that are the growth rates and the narrow rooms with whom they had to cope in Rödermark.
As soon as a nearby building was let free Bernd and Michael didn’t think too much before renting it. After this expansion the company has now a 800 squared meter warehouse surface and 250 squared meter surface for offices and show room.